We've found 3 matching boats for you Boston Whaler 350 DEFIANCE  The Boston Whaler 350 Defiance is a premium express fisherman with a number of innovative features. This baby is loaded for comfort, with an uptown cabin and a deep-V hull that slices and dices with the best of them. Its broad 13’3″ beam also makes this one of the most stable boats on a drift, at rest, or on the plane. Its wide, flat chines throw water out and down, offering a dry ride in all but the worst conditions. And with 20 degrees of deadrise at the transom, it’s a good compromise between sea keeping and easy planing. Plus it reduces the upwind lean found on many sharper V-bottoms. The ride is solid and doesn’t hammer or pound and is comfortable at a steady 28 mph in reasonable sea conditions, and it has modest fuel consumption. The cabin is upscale. There’s a queen-size berth with a mattress – made from three types of foam – that’s over six inches thick; no hard, sweaty vinyl pads here. The galley has Corian countertops, there’s a stand-up head with a fully enclosed shower, and a full-size refrigerator with a freezer. One feature many boaters will like is the hideaway tackle cabinet above the dinette, layout the good silver and the champagne glasses, and nobody will ever suspect this is a real blood-and-guts fish boat. On this Whaler, all the fishing goodies are just right. The cockpit tapes at 10’6″-by-7’6″, providing more than enough room for a crew baling a hot blackfin bite. A unique feature is the transom door, which has the standard flip-up top, but the door itself slides into a pocket so there’s no problem of it flopping around outside the transom as often happens on hinged doors. Like everything else, the door is overbuilt, with hardware that could have come off a tugboat – except for its sleek chrome finish. The 54-gallon Livewell is where you want it, dead-center aft in the top of the transom deck. It’s got two fills and two drains, all screened so bait won’t escape and scales and moss won’t clog the system. There’s a rigging station behind the cockpit that includes large tackle drawers, a freshwater sink, and a cutting board. The centered helm has wraparound seating on either side, making the skipper’s job less lonely. In addition, there are two jump seats facing aft for those assigned to watch the rods. The hardtop is foam-cored and about three inches thick, designed to serve as the deck for an upstairs con. For comfort in those long no-wake zones, there is a power vent in the center of the massive, stainless-steel windshield frame that provides a breath of fresh air. Features Include a Full complement of electronics including Radar. Full Gauge Pkg. AutoPilot Compass VHF Radio Fully Adjustable Helm Seat Twin Yanmar 6LYZM-STE 420HP Inboards Generator Auto Fire Suppression System Dual Racors Strainers Sliding Engine Hatch Reverse Oil Changer System Dinette, Converts to Bed Full-Size Bed, V-Birth Large Refrigerator W/Freezer Microwave Oven Sink W/Hot and Cold Water Teak and Holly Floor Ample Storage Electric 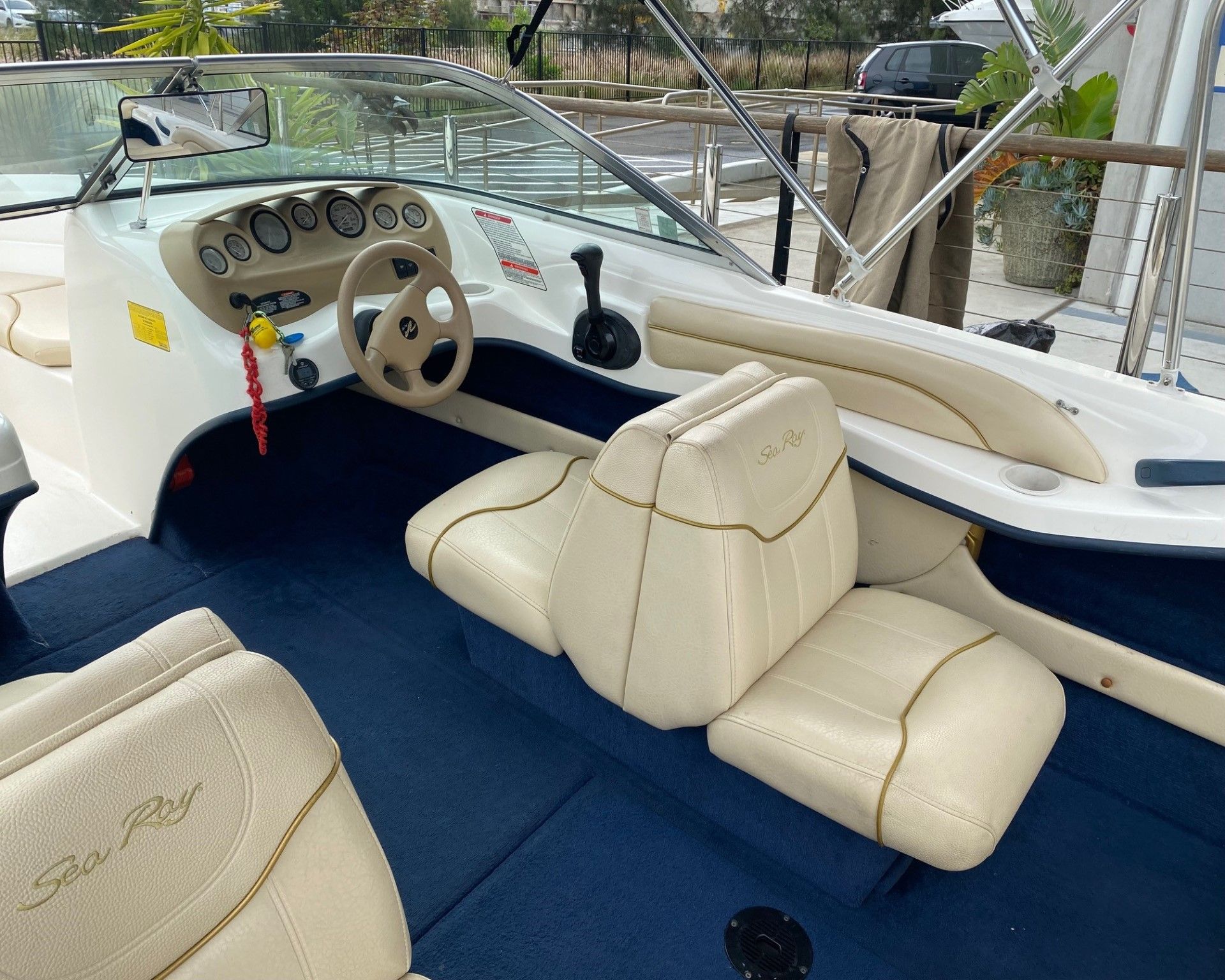 SEA RAY 180 BOWRIDER This is a genuine 1 owner boat since new, it has been meticulously loved and maintained and presents as in excellent condition, traded on a new Sea Ray. Powered by a 4.3L Mercruiser MPI engine 220HP, Alpha 1 drive ( 296.6HRS) This Sea ray 180 is on a Boeing trailer and ready for immediate delivery. Licensed to carry 8 people. Options fitted: 2 x back to back helm seats that convert into loungers Rear jump seats to create sun lounger Bow Cover Sea Ray factory mooring cover. Bimini and sock Paddle, fenders, and life jackets 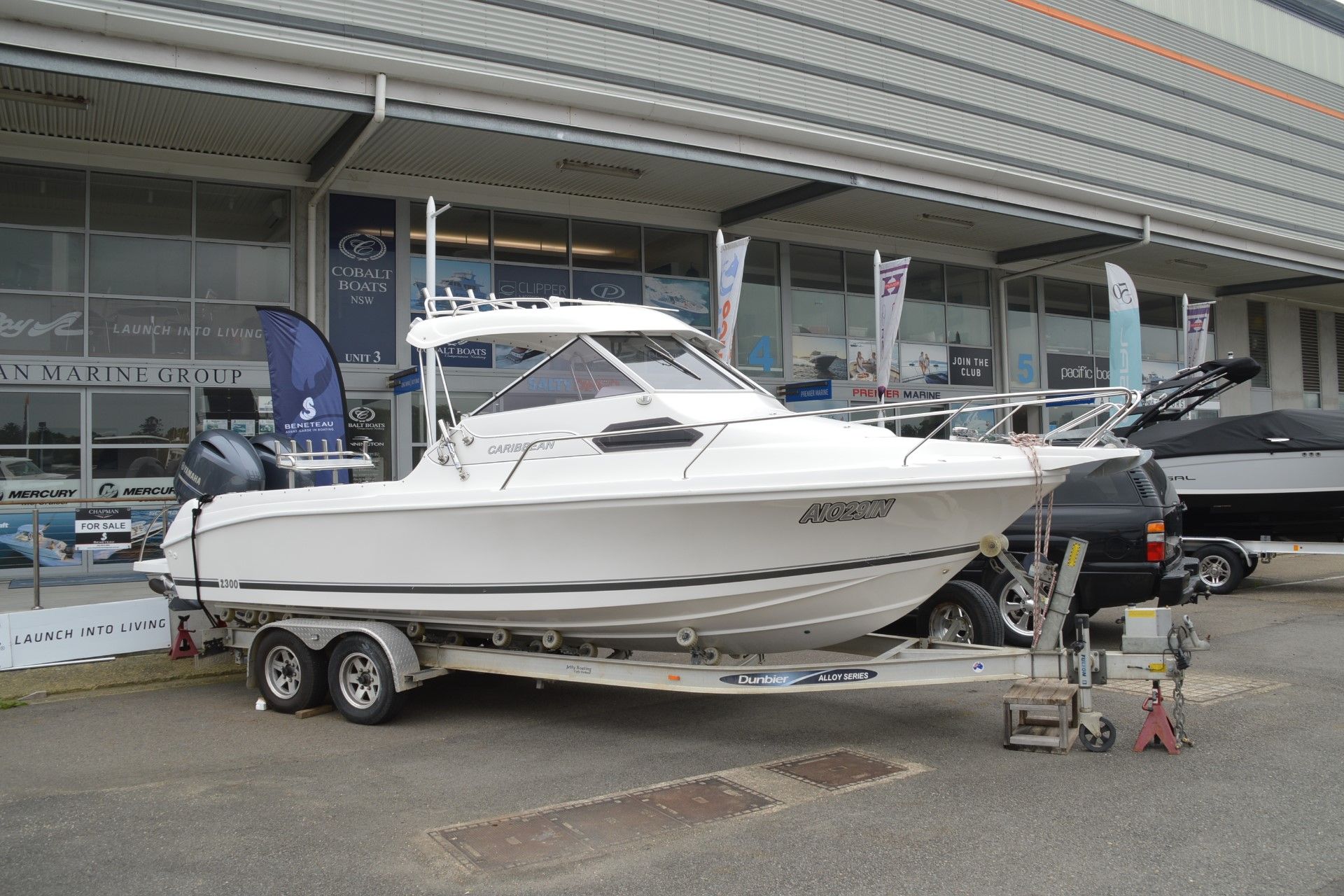